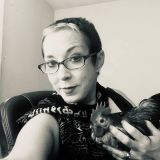 “A Pragmatic Ruin and the Objectionable Southern Woman” is an essay that traverses the loss of my life as I knew it, as I was expected to experience it, and (in the end) how I found a more authentic place to stand. Aging, at least for me, was complicated by a traumatic shift in career—as well as an empty nest. As I have always operated well outside of the norms of Bible Belt convention, I found myself at war with both my department at a local university and my neighbors. In this essay, I lean into those fractures and intersections between culture, aging, and identity in an effort to offer something other than compromise. Rather, I see utter transformation as an alternative. My research of driftwood, up against the hindsight of loss, informs this work. This time in my life was marked by the transient and useful nature of driftwood, a study of a reincarnation of purpose that impacted my journey as a Southern woman and academic.

I’ve been studying on the idea of driftwood lately—not just what shapes it, changes it, or even damages it as it drifts through the ocean and against rocks, but more about the entirety of its “life.” I’m an analogy girl at heart, and so somehow, this world and all of its mysteries make sense through other images in my mind. This is one that still has me caught in its clutches.

While I have marveled over driftwood art in overpriced storefronts, I had not encountered it upon the sand until stumbling upon Driftwood Beach at Jekyll Island.  As struck as I was standing there as a young mom, the significance of those storm-wrecked trees didn’t sink in until I went back in my early fifties. There were several monolithic pieces, but the one that I loved the most was a broken oak much smaller in stature. She had stories to tell, man. I had taken dozens of pictures of my sons saddled upon this driftwood for nearly two decades, but never had I been the subject of the camera. The downside of single motherhood, right?

This time, grown sons in tow, I sank in and became part of the picture. I could feel her, the green she used to be and the wind in her arms, the day the ocean swept her up and she drifted far from who she had been, and the time she had spent becoming . . . well, art. She would be swallowed up one day and drift again until her bones reduced to silt and salt.

In the meantime, she had become the playground of summering children, perches for sea gulls and proof of land for shrimp boats after a brutal workday. In the most profound way, she was in the middle of that journey back . . . but not before teaching folks a thing or two. I mean, not all trees get to be driftwood. Many are ravaged for paper, furniture, pallets . . . not this gal. Her kin must have been heartbroken as she fell in that first wave, ripped from her roots and swept away into dark waters. How painful it must have been to watch as she lost all control. How solitary it must have been, cell memory still intact, as she sunk into the hurricane that didn’t know her name.

After all, I want to imagine that my oak was like me.  I try to picture her laughing as she shook all of her leaved-branches to bare bark—and I run my hands through my own shorn hair. Perhaps she twisted against the wind, stretching her bare roots in abandon, and all the other Southern oaks wouldn’t have her to tea.  She might have spoken against dogmatic and spiteful institutions, thrusting her face into the sun and away from the safety of the wood line. I see her standing there against a cliff made of clay and Southern crosses, daring herself to fall.  And maybe the storm, spinning in part because she had called it in, decided she could be something more.

And it’s there, in that moment of ruin, that I fall in love with her.

Such an anarchic moment can precede quite the transmutation of the original life—despite the screaming, gnashing of teeth, and general havoc that ensues along the way.  In my research of driftwood, I found a wondrously fair explanation for this chapter of a tree’s life:

A tree undergoes reincarnation when it lands in flowing water. Branches, bark, and heartwood—what appears to be nothing more than floating debris—become either home to or sustenance for a range of plants and animals. In old-growth forests, up to 70 percent of the organic matter from fallen trees remains in streams long enough to nurture the organisms living there, passing through the digestive tracts of bacteria, fungi, and insects. Caddis flies and mayflies undergo their metamorphosis into adults while anchored to floating wood. When they emerge, they in turn become food for salmon fry, salamanders, bats, and birds. Larger logs control the very shape and flow of streams, creating pools and back eddies where returning salmon rest and spawn. These pools provide critical shelter for young salmon as they hatch, feed, and hide from predators before they make a break for the open sea. (Payton, 2018)

Reincarnation of this ilk might, indeed, equate to an ecological afterlife—but again, not all trees are granted this particular transformation. Logging, high winds, flooding . . . these are the forces that sweep a tree into the violent, chaotic process that recreates them. To become in this way is a prodigious event.  It is one that I had refused to experience, myself, the storm around me be damned.  That last day in Georgia, I finally stepped into the picture: my arms reaching across the remnants of branches, shadowing a life felled long ago. Roots that had been anchored deeply into the shoreline now rose as fingers against the sea, beckoning the next journey forth. She was on her way somewhere—and so was I.

I didn’t know yet that I would soon be a grandmother, nor that it didn’t matter that my career as an academic had taken a swift and upending turn. I couldn’t comprehend that my garden would evolve into a farm, or that I would now grow differently within it.  I was broken, battered by the tempest that had finally come to my neck of the woods. Where I had built myself before, there was no longer solid ground.

When we packed up to leave, I went to say goodbye.  We had always traced our names in the sand, a family tradition of many, yet the tide had begun to come in and the pool around my driftwood had sunken low.  But there, just under the belly of the arched wood, were the crabs and the little fish, darting around and clinging to their refuge on the sand. The oak had traded her squirrels for the sea, her acorns for the fodder of fry.

And I had been a fool. My toes, painted scarlet, wavered and bled into the foam of all I had been and all that I had lost.  I dug them in, deep into the impermanence of it all, and tried to find form.  Anything.  Nevertheless, the tide receded and wrenched it all away, the sand crumbling under my feet as if I didn’t need it to stand.

Yet somehow, I did. My driftwood stood with me, and together we remained until my husband called me back to the world of cars, catfish suppers, and much-needed showers. Somewhere between the swath of night and the road trip home, I slept in a rented bed that creaked and moaned louder than the voices of the past. It comforted me, that discomfort.

Sometimes, it’s in the crash of a tidal wave that we unearth new ground.

My dance on the sand is now four years in the past. Aging remains, indeed, a courageous act:  from my CBD cream to my yoga stretches, the battle to become a weathered, salty crone rages on.  I no longer must attend faculty parties, standing as the token wild thing that had somehow been tamed.  My wounds have been tattooed over, the scars no longer so alien to me. I run my hand along the weave of them, across the bumps and scratches of living, and find it to be good.

Strange, that this time of my life should collide with so much joy—perhaps, such a coincidence will make the fall much less objectionable in the end.  Hopefully, I will have arranged the bones of all these years into nesting grounds and sustenance for those I leave behind. It could be a refuge, that bit of me left upon the shore. I imagine my grandchild’s toes there, digging through the sands of it all, cackling at the waves that threaten to drive her back . . . just before she breaks for the open sea.

It is a dream of a useful afterlife. The time before no longer holds sway, for now I plead with the universe: do not hammer me into paper, I no longer want to be crafted into a desk.  Please, oh please: let me be something more.

And so, I venture to become driftwood.  I cannot imagine it as wholly romantic; rather, it seems to me that true transformations are often fiercely and irreverently pragmatic.  Yet, a tree once taught me that those moments of ruin are only a pause, a passage really, on the way to something else.  And, until we really get it in a deep-mystery-arterial-sort-of-way . . .

Payton, B. (2018, February 6). “The trees that sail to sea.” Hakai Magazine. https://hakaimagazine.com/features/the-trees-that-sail-to-sea/?xid=PS_smithsonian

Featured image by Cely_ for Pixabay

Katharyn Privett-Duren, PhD, is an English professor, writer, and micro-farmer in rural Alabama. Her work as an online team lead and graduate teacher support her greater dreams, most of which engage in the world of small farming and eco-writing. While her background and doctorate are grounded in Feminist Theory, Goddess Theology, and Rhetorical Theory, Katharyn’s writings have led her outside of the academic world. She is currently curating a collection of personal essays that focus upon the cultural implications of living outside of the policing institutions of the Bible Belt as a Southerner.

Katharyn is also a new grandmother, a Master Gardener within her state, and a regular contributor for Farmer-ish, an online journal created by her colleague and friend Crystal Sands. As an organic, biointensive micro-farmer focused on sustainability, Katharyn continues to reach out to her neighbors in an effort to teach them to grow their own food with minimal impact to their financial resources or the environment. Her small plot of land, Little Halawakee Farm, sports rare varieties of turmeric, galangal, ginger and herbs of all kinds. Little Halawakee Farm has become a haven in a section of the country heavily laden with pesticide and herbicide residues and sustains a small CSA (Community-Supported Agriculture). As a new grandmother, she hopes to pass down the wonders of reading, writing, and eating a dinner that grew in peaceful communion with all that reside in a sacred, natural space.

“The AutoEthnographer is an award-winning, non-profit, open-access, peer-reviewed literary and arts magazine dedicated to presenting the creative side of autoethnography, a qualitative research method uniting ethnography and autobiography that utilizes lived experience as evidence with which to explore cultural phenomena.” ISSN: 2833-1400

Æ: Musings from the EditorsAllNews & Reviews